I work at The Career Center and am a mother of a Hofstra Alumnus. My job in The Career Center is to work on all job fairs, Pride-CMS and PrideRecruiting (how students can have interviews on-campus with employers). My son was a IT (Information Technology, Zarb  School of Business) major looking for an internship in his Junior/Senior year.  I said to him "It’s time for you to use what your mother works on everyday to make it possible for students to find internships and full time jobs." 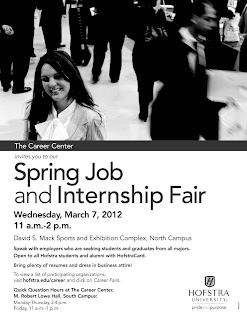 So, my son being the "hard head" that he is, told me "not to worry about it", he would take care of it himself.  Later that week, he said that he had gone into Pride-CMS and found a company for an Internship.  They responded to him, stating that they were attending the Spring Job and Internship Fair and that he should come and speak with the representative.   This was great! This was music to my ears!  Everything I work for is helping someone I know. He did attend the job fair and met with the representative where they set up a formal interview time two days later. The fair also provided an opportunity for my son to go around and submit his resume to a few other employers.
The interview went well and he started his internship the following week! That fall he was graduating and they offered him a position in the company full-time.  He accepted and is now working for them full-time.  Hallelujah!!  Full time job, benefits and he likes what he’s doing.  What else could I ask for?
So, if it wasn’t for me telling him to try Hofstra's Pride-CMS and attend the Job Fair he might not have found this job.  Everyone should utilize all The Career Center resources that are available to them.  By utilizing Pride-CMS, going to the job fairs, and networking with employers you could get that special job just as he did!