Ok, enough of the Spanish.  Pretty much I said, Have a great weekend and finally it's Friday! You can translate Ay yay yay!  :) 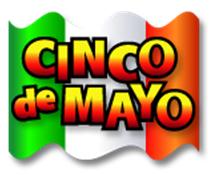 So tomorrow is Cinco de Mayo and not to give you the long drawn out history, but it's not Mexican Independence day.  It's the holiday that commemorates the victory of the Mexican militia against the French army way back in the day.

It's not a holiday that I celebrate but since it's Cinco de Mayo, it made me think of why it's important to know another language.  My native language is English, but I learned Spanish growing up.  My father is from Argentina and when I was a little girl and during every summer break, I pretty much grew up in Argentina with my cousins, aunts and uncles.  It was easy for me to learn the language because I was young and immersed in it.

BUT it's NEVER too late to learn a language.  Hello, Rosetta Stone! In today's competitive market, knowing another language gives you an edge.  You can apply for positions that may require you to speak that language and you may even be able to travel and work in those countries.

You can possibly get some experience as a translator for summer or volunteer opportunities.  I remember when I was in high school, I volunteered at a nursing home and I was assigned to all the spanish speaking residents.  Do you know how amazing it felt to cheer someone up just by talking with them?

In our office, I am the resident spanish speaker, so if anyone needs help with something, I'm their go to person.  I don't mind it at all.  Kinda makes me feel special.  So go ahead, feel special, get a competitive edge and start learning another language!

And if you get some Mexican food for Cinco de Mayo, have the Chimichangas, because it's just so much fun to say!