Many people have dreamed about the opportunity to work for a major companies, such as Google, Apple, Facebook, etc. I’ve heard the rumors about the amazing work environment, where people get to travel to remarkable destinations and have the ability to combine work and fun regularly (not to mention great perks, like free food!!). Well, according to the reports, all are true! Many of these creative companies strive to provide the best for their employees. 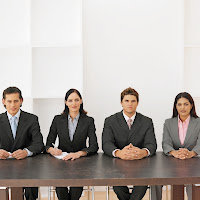 Sounds like a dream come true, right?! So, how does one land a job at one of these high-profile companies? Well recently, I read an article by William Poundstone in the Wall Street Journal entitled, How to Ace a Google Interview. Here he discussed, the rigorous candidate review process (out of the million job application Google receives a year, only 1 in 130 applications results in a job!) and Google's unusual approach to interviewing. Let’s just say, hauling through old notes and textbooks, trying to educate yourself on the most relevant topics you've covered in your previous coursework may not help much…
Question 1: You are shrunk to the height of a nickel and thrown into a blender. Your mass is reduced so that your density is the same as usual. The blades start moving in 60 seconds. What do you do?
Before you jump to first answer that pops into your head, consider all options. Google interviewers are looking for the

most unique and innovative responses. So, what is the right answer? Well, since the question is hypothetical, technically there is no right or wrong answer. However, some of the most common (and least desirable) answers include lying below the blades or pinning oneself between the blades.
A great answer usually stems from hints given in the question. Here the interviewer mentioned that although your size was reduced significantly, your density would remain the same. One the best answers reported from Google interviewers, was to simply “Jump out of the jar.” Sound too good to be true, but in-fact quite genius!
“In short, if you were shrunk to 1/10 your present height, your muscles would be only 1/100 as powerful- but you’d weigh a mere 1/1,000 as much. All else being equal, small creatures are “stronger” in lifting their bodies against gravity. Were you shrunk to nickel size, you’d be strong enough to leap like Superman, right out of the blender. Think of the feats performed by fleas in a flea circus” (Poundstone, Wall Street Journal, December 24/25 2011).
Question 2: What’s the next number in this sequence: 10, 9, 60, 90, 70, 66...?
Spell the numbers out:
Ten
Nine
Sixty
Ninety
Seventy
Sixty-six
The sequence has no mathematical value, the numbers are organized by ascending order based on the number of letters in the spelled out number. The next correct number would contain nine letters i.e. 96= ninety-six ((Poundstone, Wall Street Journal, December 24/25 2011).
Question 3: Using only a four-minute hourglass and a seven-minute hour glass, measure exactly nine minutes without the process taking longer than nine minutes.
“Start with both hourglasses at 0 minutes. Flip over the four-minute hourglass when it runs out (at 4:00); ditto for the seven minute glass (at 7:00). When the 4:00 minute glass runs out for the second time (at 8:00), the seven minute glass will then have one minute of sand in its lower bulb. Flip the seven-minute glass over again and let the minute of sand run back. When the last grain falls, that will be nine minutes” (Poundstone, Wall Street Journal, December 24/25 2011).
As you can tell, questions tend to be very unique and rely heavily on problem solving ability! You can hear more about the interview process from the video below!

~ Alison Charlebois, Graduate Assistant at The Career Center
at 1:58 PM